On June 22, 2020, the Common Council authorized Staff to work with the Steve Brown Apartments on the redevelopment of the Sugar Creek and New Century School sites. The entire selection process and other applications can be viewed in the below text. In October of 2020, Steve Brown Apartments and Alexander Company requested approval by the Plan Commission (YouTube) and the Common Council to review their General Development Plan and Zoning Map Amendment (packet large file) for the entire property, which was approved.

A virtual neighborhood meeting hosted by Steve Brown Apartments and the Alexander Company was held on March 10, 2022 to discuss road improvements associated with the Sugar Creek Elementary School site. The meeting was recorded and can be viewed by clicking here. The team provided information regarding the construction timeline and discussed hanging fliers on doors if/when their driveway will be closed or if/when water may be shut off. Questions were raised about closing the sidewalks, driveway access, construction timeline, and if the crossing guard would be relocated. Meeting organizers confirmed that construction traffic will travel Legion Street and Industrial Drive unless the construction crew is actively working on Church Avenue.

For additional comments regarding the road improvements, please contact Dan Seeley at dseeley@stevebrownapts.com.

A neighborhood meeting hosted by the City of Verona, Steve Brown Apartments, and Alexander Company team to discuss public park was held on February 25, 2021 and can be viewed on YouTube. The goal of the meeting is to obtain feedback on the public open space located at 420 Church Avenue (the former Sugar Creek Elementary School and the former New Century Charter School properties).

For additional comments or ideas for the public park, please contact Brian Munson at bmunson@vandewalle.com.

As part of the redevelopment of the former Sugar Creek and New Century School sites, land is to be set aside to create a public park. A conceptual design and costs associated with the design was presented to the Park Board for their discussion in October 2021 and can be viewed by clicking here. This is still in the concept phase. Please contact Brian Munson at bmunson@vandewalle.com for additional comments or ideas for the public park. 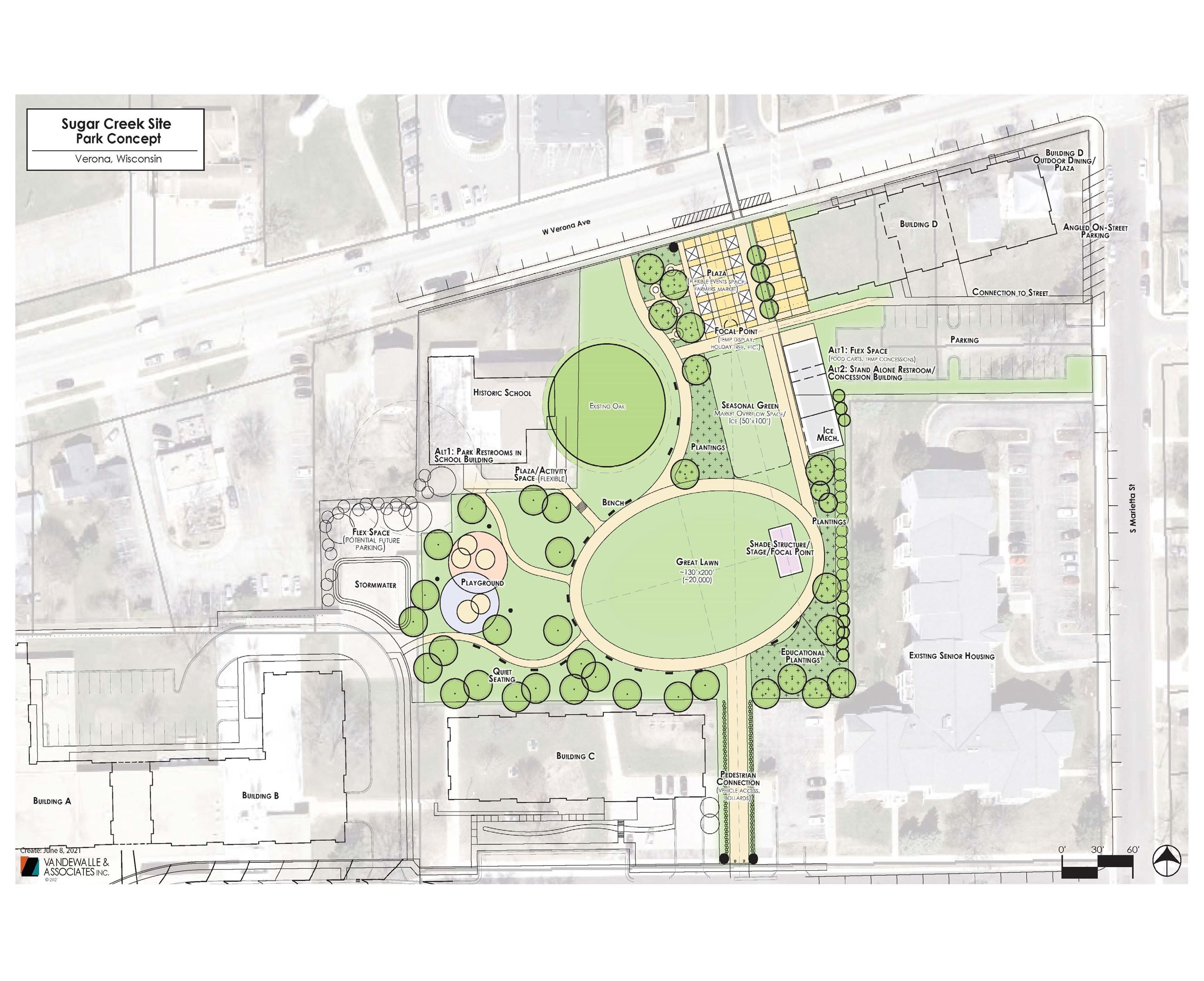 The Verona Community Development Authority (CDA) requested redevelopment proposals from qualified development firms and consultant teams to redevelop 420 Church Avenue, which is currently being used by the Verona Area School District as schools. The City received six (6) proposals, which were due on April 27, 2020. The proposals are listed below with links to review the proposal and the ability to click on the image for a larger view. The schedule table has links to view each step in the review process.

On June 22, 2020, the Common Council authorized Staff to work with the Steve Brown Apartments on the redevelopment of the Sugar Creek and New Century School sites. 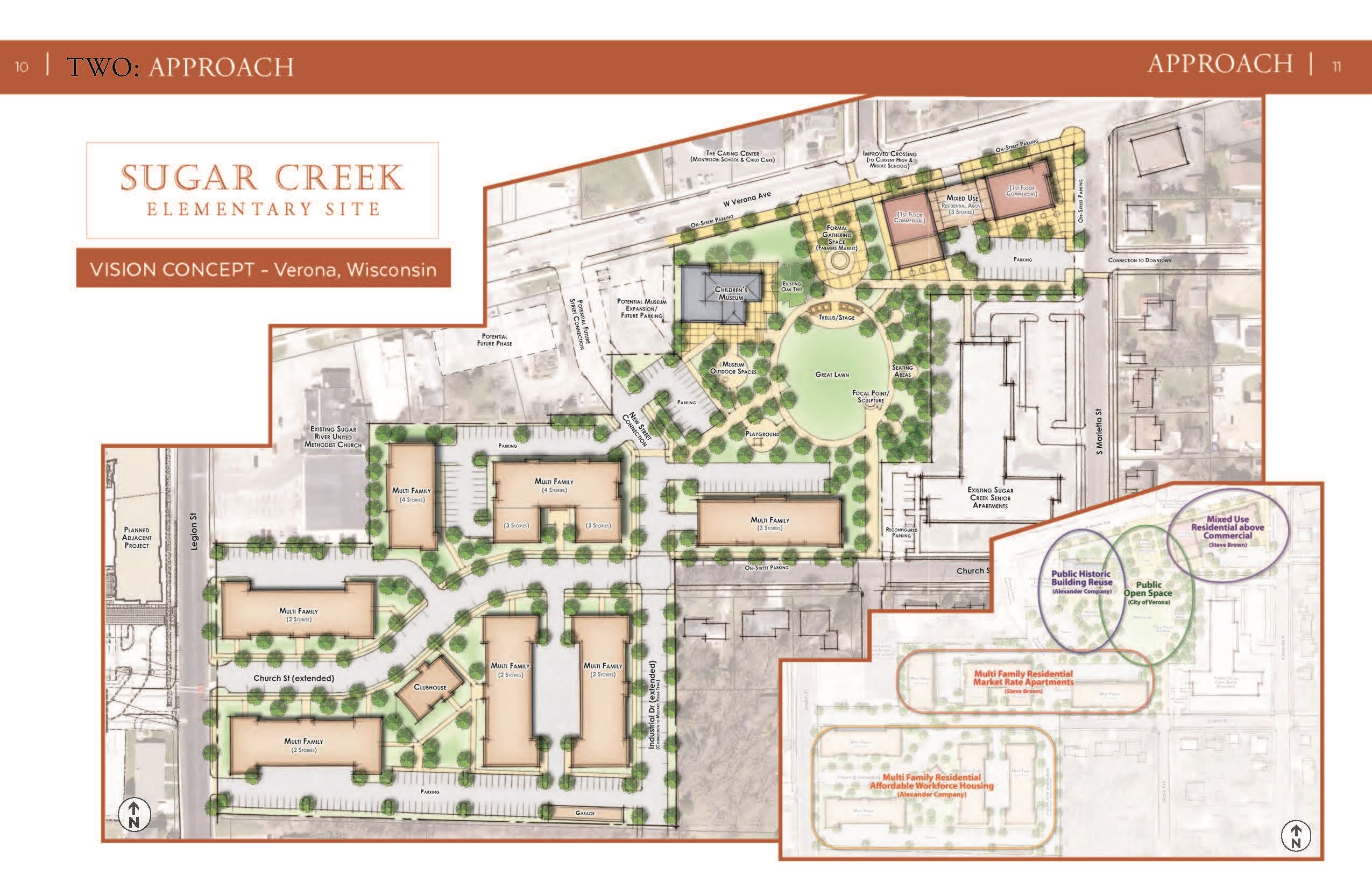 Proposals will be reviewed by an evaluation committee comprised of the CDA and City Staff. The CDA held a public interview with selected developers on May 18 that can be viewed via YouTube. On June 2, 2020, the CDA held a meeting where the CDA recommended two developers to the Common Council. This meeting can be viewed via YouTube. The CDA’s recommendation was presented to the Common Council at their meeting on June 8, 2020 (packet). The Common Council discussed the proposals on June 22, 2020 and selected Steve Brown Apartments to work with Staff.

Community Design Solutions (CDS) was tasked with developing concepts for the property that was presented to the public in August of 2019. CDS began with five (5) concepts. These were modified based on comments from staff, public, CDA, Plan Commission, and Common Council to have three (3) final concepts. All of the designs proposed by CDS can be viewed online.

The Downtown Mobility and Development Plan was adopted in March of 2014. The Plan shows the property as mixed residential and downtown mixed use development. Some of the themes from this Plan were incorporated into the CDS concept plans.